Kill Ritual, With Karma Like This They Have Killed It 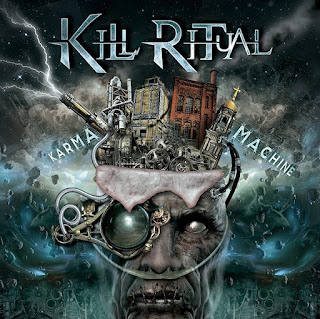 Karma Machine - With the opening pinch harmonics the guitars take flight at a speed which you can feel the wind in your hair and bugs smacking your face. This is the type of metal that employs not just fiery playing but also groove and dynamics. The guitars in tandem with the pummeling of the drum kit hit you ears like a fright train rolling flat out. Vocal work is a bit reminiscent of late eights work. Lyrics ring through clearly and are preformed with a fair amount of well controlled vibrato. While there no notes are sung high as the stratosphere the melody obtains a masculine tone without sounding like a pissed off Cookie Monster or Tasmanian Devil. Lead guitar work is full with dynamics that employ blistering runs and a fair dose of soulful bends. One of my favorite tracks was "The Enemy Inside" the opening guitar tones reminded me of Soudgarden's "Jesus Christ Pose". There is much mastery in each song that will make even the most tart fly into full blown air guitar with head-banging in toe. Shifting gears Kill Ritual slow down the tempo on the track "The Key". I would have liked to hear the bass guitar a tad higher in the mix. It shines a bit but when the guys rev back up it dissolves into the background. Kill Ritual is the type of band you listen to when want to get pumped up, but don't want to listen to music that just sounds like a bunch marbles in a metal garbage can rolling down a hill. With such a heavy groove factor present in songs like "Karma Machine" I am reminded of a Pantera but with a two guitar attack. One thing that puts this band over the top is the excellent drum work. There are actually many passages where the percussion work give the guitar deftness a run for its money. I don't think that there is one inch of the kit that isn't utilized. The texture is very intricate. The opening interplay on "My Green Room" feels confusing and uncomfortable and as the tension peaks the track evolves and unfolds as an absolute sonic onslaught. It's rare for an instrumental track to catch my ear and hold my attention, but Kill Ritual create a visceral song that cuts without vocals. Throughout this release there are plenty of hard-hitting moments, but one that stands out is ”Land of the Dead". Sometimes you just hear a song and like Keanu Reeves in the Matrix you go " WHOA!" It's got that kind of heavy factor. Rounding out the set with "The Cameras Eye" Kill Ritual throw in some shimmering acoustics and while they mellow for a pause he guys prove they know how to rock and groove in any texture. I would recommend this release to anyone that likes Hard Rock or Heavy Metal. Cranking Karma Machine to 11 I hope it will be paid back sevenfold so that this is just the beginning of what we are to hear from Kill Ritual.

Posted by Whisper Behind the Light at 2:43 PM

Email ThisBlogThis!Share to TwitterShare to FacebookShare to Pinterest
Labels: Kill Ritual, Music Review, Music Reviews, Music Reviews by Michael, With Karma Like This They Have Killed It